Spain is such an incredible country. It's been far too long since we've explored its varied cities (and we've never seen them together) but these photos from today's guest post ignited a reminder that we should make plans to return soon...

It started with the love of a language. What began as a secretive, solitary study, trying to roll my r’s while staring at myself in the mirror of my bedroom, has led me to be living and learning on the streets of Spain. The following photos are snapshots of my memories, moments I've had in six different cities in Spain. Each is depicted differently, for some I defined by the grandness and beauty of building, others by the sincere smiles of the people who call these places home. 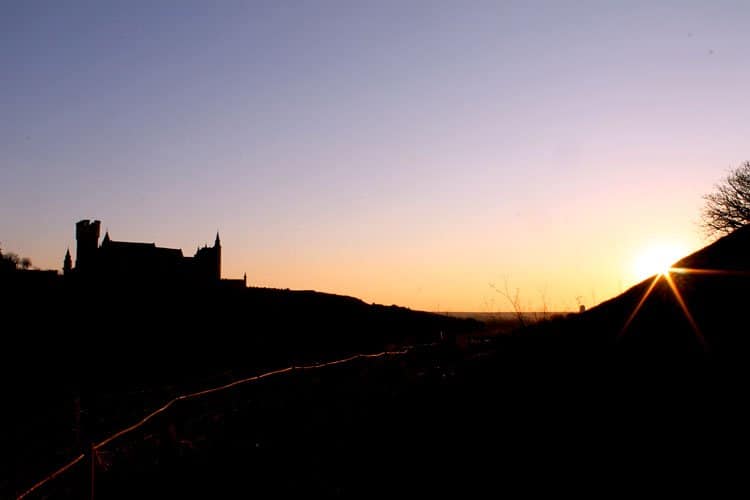 My current place of residence; it is small but the culture is rich and the landscapes are breathtaking. Featured above are the cathedral and castle, taken from the perspective of a hiking trail just above the local monastery. The castle in Segovia is said to be one of two castles that inspired the image of the Walt Disney world castle. The city itself is filled with the hustle and bustle of any main area of commerce, but the architecture lining the streets and filling the spaces is absolutely incredible. La Sagrada Familia is one of the most popular tourist spots in the city and in the country for a reason. Designed by Antoni Gaudí, the church has been under construction since 1915 and is still in progress of being built. Standing in front of the church, looking up at the spindles spiraling above my head, I felt engulfed in the enormity. La Sagrada Familia was not overrated in the least bit; it is a marvel that I believe can only be fully appreciated in person. The main attraction was without a doubt the Alhambra, an Islamic palace reflecting a variety of architectural styles. When I entered the gates of the Alhambra I felt completely and totally inferior; I was drenched in rain from head to toe and resembled a wet dog at best. The Alhambra is more than a singular building; it is a complex of gardens, grand archways, and elaborately designed buildings fit for the nobility it once held. The ceilings and walls are built in accordance to classic Islamic style, a current monument showcasing the occupants of the past. An Arabic inscription borders many of the walls, reading in translation “Only God is victorious.” Classified as a college town, Salamanca was a place of peace and positive experiences. It was a sunny day when I first ventured into the Plaza Mayor. Restaurants, ice-cream shops and other small vendors lined the square exterior of the plaza; the center was inhibited by a band of sun-seekers. People of all ages sat on the warm ground, reading, talking, laughing, and enjoying the company of one another. I was impressed with the plaza on the first day of my visit but brought to tears on the second. It was a stroke on luck that I walked into the Plaza Mayor at the peak of a demonstration for peace, people standing proudly hand in hand. The message was simple, intentions were pure and everyone was welcome. In a country of unfamiliarity it was touching to be reminded of the international push for peace. If pressed to choose a favorite place in Spain, Sevilla would be at the top of my list. The palm trees were a welcoming sight into the warm spring air. Castles and cathedrals are not exactly a novelty in Spain, which made me hesitant to let myself feel excited about the ones in Sevilla. After the experience, I would recommend both the castle and cathedral in Sevilla above almost any other city in the country. The cathedral is the largest of the gothic style in existence and the third largest church in the world. Competing for grandeur, the castle seemed to have an almost magical quality. I felt like I was in another world walking through the buildings of the castle into the garden. Peacocks roamed the paths and orange trees hung overhead. The sound of a man-made waterfall filled my ears as I got lost in the garden maze, not wanting to be found. My day in Sevilla turned to night at the top of the Metropol Parasol, featured in the two photos above. This recent addition to the city was completed in 2011 and claims the title of the world’s largest wooden structure.  It was refreshing to see contemporary architecture contrasting the typical classic style that is so common in Spain. It costs 3 euro for admission to the top of the structure and includes a complimentary drink. It was well worth the money I would have otherwise spent on bus fare to have a drink with friends while watching the sunset. My words to describe this city are scare because but my memories are full. This was the perfect place to spend only a night and feel like I had fully seen the town. Tourism is cultivated through the selling of swords and other steel products; one of Toledo’s claims to fame is having made the swords for Lord of the Rings. For me the most satisfying part of the trip was exploring the landscapes, which is where my friends and I came across an abandoned cave. The excitement of finding a broken down building was mixed with the adrenaline of being somewhere unfamiliar, possibly forbidden. If you find yourself in Toledo, take a walk across the bridge and by the river to find the building! A beach town by nature, Valencia had me happy when I first spotted a palm tree and sand. The first photo was taken at the Lladró, a company that produces exquisite porcelain figures. The factory was not in the main part of the town, but by city bus it was easily accessible and well worth the trip. More well known in Valencia is the City of Arts and Sciences, featured above. The buildings were a marvel to look at, functioning art forms.

Although possibly and probably biased, given it is my current home, Spain is nothing short of incredible.

Bio: Kristyn is a student, traveler and photography fanatic. Her days are currently being spent in Spain, living the accident-prone life of a girl abroad. Through her work she aspires to capture the fleeting moments of ordinary people, whether it be through a photograph or written account. You can find out more about her journey at escapingthewindow.blogspot.com. 8 Restaurants To Visit In Marrakech, Morocco Spain is always in my wish list. I already visited Barcelona. This is the place which amazes you with its modern architecture and old tradition blend. Even you can experience the Mediterranean sunshine and high-quality delicious Spanish food. It is popular for its unique architecture all across Europe’s. if you are going for holidays then don’t forget to witness best-preserved Gothic architecture at Ciutat Vella one of the Old City and at Nouveau buildings find Gaudi’s work which is even considered as icons of Barcelona. The pictures of this article are really inspiring. After reading this post I explore more… Read more »

I have actually been living in Spain now for almost 12 years and can say each day I love it more and more. Like you I’ve visited Barcelona and Sevilla is only a couple of hours drive from where I live. But I also happen to love Madrid and there are some amazing places close to Spain’s Costa del Sol that are amazing as well. A couple of places that are worth a visit are Ronda and also for me Marbella. Plus one mustn’t forget that it is also possible to go skiing in this part of the country.

I love Spain to the bone. I’ve traveled to most of this amazing country and I can truthfully say that Spain is my favorite country the world.

I’m so happy I’ve found your awesome website!! Love, love this article on Spain – and the pictures are out of this world! Thank you for being awesome 🙂

This essay just reinforces why Spain is one of my favorite countries. It’s beautiful! I haven’t been in about seven years and would love to go back. The tough part will be deciding whether to revisit the cities I loved or exploring some new-to-me areas!