A Day Trip To the Pakri Peninsula And Paldiski From Tallinn

On our first full day in Estonia we headed off on a day trip along the western coast with Tallinn Traveller Tours. This was an interesting tour, which covered a wide variety of unusual stops along the way. To put this post in context, it might be helpful to start with a history lesson.  Estonia was occupied three times during World War II, the third occupation by the USSR lasting 50 years. Over 200,000 inhabitants were imprisoned, killed, deported, mobilized, forced to evacuate, fled the country or were killed. While Estonia achieved independence in 1992, the last troops did not leave until September 1995 following the transfer of the nuclear submarine training centre on the Pakri peninsula to the Estonians. The environmental damage caused by the Soviets has been estimated at EUR 3.6 billion. This damage included things like oil spillage, construction debris, untreated sewage, lead accumulators and chemicals in the ground. During the occupation the Pakri peninsula was off-limits to the people of Estonia. In 1968 the submariners training centre was completed in Paldiski. When the army left, a large amount of radioactive waste remained in the territory of the centre and the ground and groundwater was heavily contaminated by oil products. The Soviets didn't care, of course, because it wasn't their country. Anything that was left of value was eventually stolen or vandalized. Though the tradition of love locks is a Russian one, this bridge in the park surrounding the Keila-Joa falls has many.

Today the coastline to the west of Tallinn is a playground for the city's residents in the summer, with lovely sandy beaches and 30 metre high limestone cliffs all within no more than a 40 kilometre drive from the city. Our first stop was to have a look at one of these beaches, though the rain kept us from lingering too long. We ducked back into the van and headed for the little village of Keila-Joa, where we could check out the waterfall. The sun was now shining and we were able to take a nice walk in the park and forest. We first encountered love locks in Montevideo, Uruguay and have come across them in a few places around the world since then. Our guide, Kalev, explained that the tradition of love locks is a Russian one, but there were many hanging from a narrow bridge in the park. The closer we got to Paldiski the more desolate the landscape became. While the town of Paldiski (pop. 4,300) is still standing, it is in varying states of decay with cheap housing and few people on the street during the day. At one time this was the most powerful Soviet naval base in Estonia, with nuclear reactors functioning continuously for almost two decades (the decommissioned reactors were removed in 1995) and the city was closed off with barbed wire. The ominous concrete submarine training base has been replaced with a logistics park and while there has been some activity with regards to new developments and investment in the port, it still looks nothing like the rest of Estonia. We turned our attention to the Soviet-style buildings and residences before stopping for a traditional lunch. Get out into the nature surrounding Paldiski and everything becomes beautiful again. Our next stop was the Pakri Windpark, a 46 hectacre wind farm that has been operating since 2004. I've never gotten so close to these windmills before and it was really cool to stand at the base of them. A sign warns not to do this in the colder months, however, because falling ice from the blades can be very dangerous. We also visited the Pakri lighthouse, which was constructed in 1889 and is Estonia's tallest. From here the Pakri Islands are visible and we peeked inside the original lighthouse as well. Just south of Paldiski is Padise, where the major attraction is the Padise Abbey, which is now just the ruins of a 13th century medieval Cistercian monastery. We were interested to hear the story of how the property was eventually gifted to Thomas Ramm, the Burgermeister of Riga by King Gustavus Adolphus of Sweden. One of Ramm's descendants, a friendly American man currently running the family's new manor hotel at the site, Padise mõis (www.padisemois.ee), gave us a tour and told us a bit about the new property. Our tour wasn't over yet. The Murru prison quarry & lake awaited us next. Murru is the most well-known prison in Estonia and is surrounded by an interesting landscape with its pretty aqua blue lake and lunar-looking quarry formations. We climbed up for a better view of the prison and some buildings that were part of the prison when it was a lot bigger but are now underwater. On the way back to Tallinn we stopped off at an old Soviet-era cemetery and to see a Soviet military airplane, which was in really good condition. 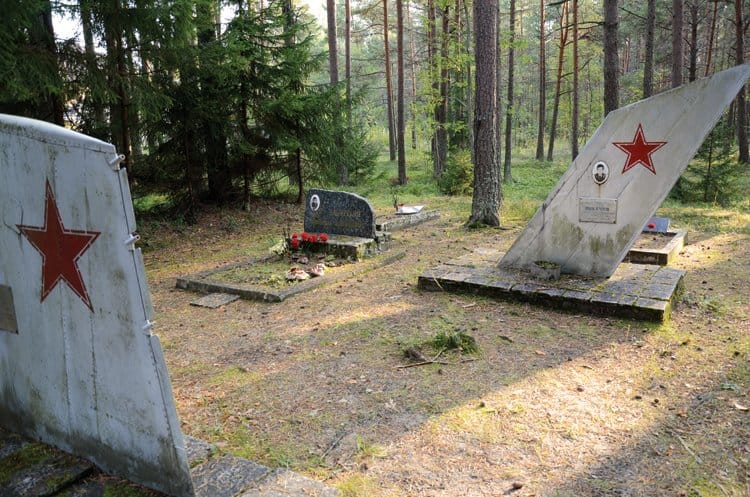 Nature and history buffs will find plenty to interest them on a tour of the western coast. Estonia certainly has a rich history but what is so inspiring for me is just how far the country has come since its days behind the Iron Curtain. We'll share more about this wonderful country in our next few posts about Tallinn.

Many thanks to the Tallinn City Tourist Office & Convention Bureau for hosting us. It certainly was – the cliffs are so dramatic!

That’s really interesting, I didn’t know any of this about Estonia’s history. Thanks for sharing.

I didn’t either until we went there – always so fun to learn while travelling…much better than a history book! =)

Really fascinating about the Soviet history. I would love to visit Estonia … Tallinn seems amazing. It’s nice to know there’s plenty more to see in the area.

What intrigued me the most about the Soviet history was how beautifully Estonia seems to have recovered from it – even better, I think, than some of the other formerly occupied countries we’ve visited.

One of my best friends is from Estonia, and I’m now really interested to visit the country. Looks like a good day out!

You’d love it – such a variety of things to do there!

i had no idea estonia’s coastline was that beautiful…and historical! great photos!

Thanks, Megan – I didn’t know either – definitely worth a look! =)