After three and a half weeks we finally reached our final destination on the South Island: the lovely coastal town of Kaikoura. We’d booked a whale watching trip here months ago, but didn’t realize at the time what a wonderful, laid-back little community we would be spending a few days in. Here you can wander along the stretches of beach and taste the salt in the air, the waves crashing in from the Pacific Ocean (which we were excited to finally see). The vibe is friendly and laid-back and the weather just about perfect. It isn’t particularly warm here, even in summer, but this is the South Island and one has to just accept the temperatures.

Keen watchers enjoying the movement of a Giant Sperm Whale off the Kaikoura coast.

I’ll admit I was dubious about seeing whales on our excursion. When we booked, the Whale Watch website promised an 80 per cent refund if the tour doesn’t show us a whale. The marine environment in Kaikoura is supposed to be so nutrient-rich that it attracts some of the world’s most incredible marine life, including dolphins, fur seals, albatrosses and, of course, whales. But these are unpredictable creatures of nature, so how could I be sure that we’d see one? The first whale we saw showed us his massive tail before diving below the surface. The way to spot whales is by looking for their spouts.

We arrived at the Whale Watch offices at 9.30am after stopping at the pharmacy in town for some motion sickness tablets. The staff advises passengers about the potential for seasickness at check-in. We were already aware of our unsteady stomachs so we thought we’d come prepared. Just before the tour started we were shown a safety video and then ushered to the bus that would take our group to the boat. Once on board we settled into comfy chairs and the crew told us all about the whales and what we would be seeing that day. We couldn't believe that we saw five whales in one morning trip! Once we got out on the water it wasn’t long until we saw the first whale, a Giant Sperm Whale. These are massive creatures that can reach 20 metres in length, so all you can really see is the top of the whale breaking the surface of the water and the spray from its spout. They come to the top of the water to feed and store oxygen for several minutes and then dive back down into the water, showing their powerful tails as they descend. 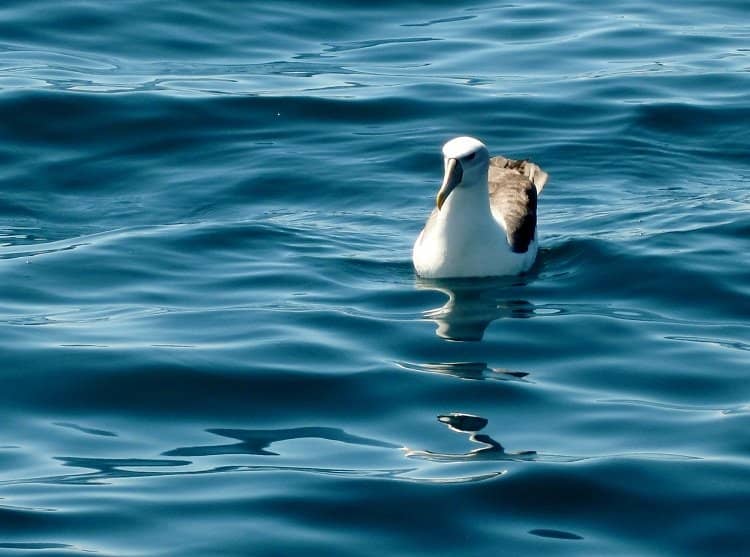 We also saw many sea birds, including the incredible Royal Albatross. The albatross has the largest wingspan of any bird. It was exciting to watch them skim the surface of the ocean on take-off.

We were told that most tours only see about two whales per tour, but we saw five! On the way back we also saw many sea birds, including the Royal Albatross. These majestic creatures have the largest wingspan of any bird. The only disappointment for me was not seeing any dolphins on our tour, but having never seen whales or an albatross before, I really enjoyed this trip.

In part two we explore a couple of other delights found in Kaikoura.

Have you been on a whale watching expedition? What did you see?

Great shots! I haven’t been whale watching since I was a kid, but i remember how exciting it was to see the whale’s tail pop above the surface. 🙂

So exciting! They are such incredibly amazing creatures =) Cheers!

It sounds like a great trip. The pics are fantastic.
Now here’s a tip for anyone researching whale watching trips. IF you’re advised to take motion sickness medication and you have never taken them before an have no idea whether you are prone to motion sickness or not… do not and I mean DO NOT agree to have a drink. The combination of those tables and just one drink destroyed my sense of balance and I spent my first whale watching trip clinging to other passengers like some king of drunk bag lady. So now you know.

Thanks for that and for sharing the tip! =) I’ve never been offered motion sick tablets and a drink together but good to know that it’s not advisable.

I’ve only been whale watching once and unfortunately it made me so motion sick that I spent most of my time barfing off the back of the boat. But pretty much as soon as that started, the whales turned up – perhaps I was bait? 😉

I think the motion sickness thing happens for a lot of people – as evidenced by all the barf bag dispensers prominently displayed around the boat. At least you saw some whales!

Yet another reason to go to the South Island! Lovely shots of the whales and the mountains in the background.

Thanks, Sophie! =) Those mountains are an incredible backdrop for Kaikoura. Such a gorgeous place.

I’ve never been whale-watching before. I’d love to go one day, looks beautiful.

Sea creatures are really amazing and you rarely get to see them so close. We’re loving the accessibility to the marine life in NZ.