Marone! The Sopranos Sites Tour With On Location Tours

It's been almost six years since the cryptic and controversial finale of HBO's masterpiece series, yet Sopranos fans from all over the world are still gathering on Saturday mornings to relive scenes from the show. On Location Tours runs the Sopranos Sites tour, taking guests from the meeting point in midtown Manhattan on a rollicking tour of North New Jersey, stomping grounds of Tony Soprano, his crew and the colourful cast of characters in The Sopranos. Joseph R. Gannascoli, who played Vito Spatafore, poses with John before the tour.

Before the tour we had the opportunity to meet one of the actors, the talented Joseph R. Gannascoli, who played Vito Spatafore on the show. He signed autographs and posed for photos with fans before we all piled into a comfortable coach to begin our journey.

Appropriately, we began along the route featured in the opening credits of each episode, which is supposed to take Tony from New York City to his home in North Caldwell, NJ. We saw many familiar locations from this iconic sequence throughout the day on the tour, including the Lincoln Tunnel, Pulaski Skyway, Valley Landscape Silo, The Muffler Man and the Route 1/9 Truck Bridge. 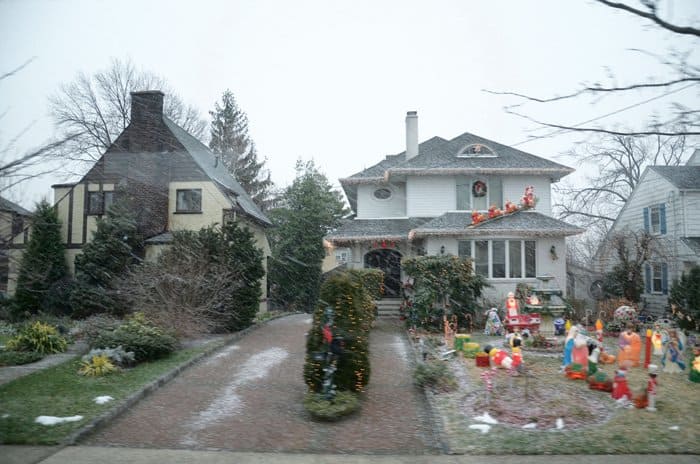 Our guide was Marc Baron, an extra on 13 episodes of the show. He kept everyone entertained with trivia and interesting anecdotes about behind the scenes information that will entertain any fan. Prizes were awarded for the extra tough questions and we were pretty impressed with the knowledge of some of the other guests on the tour. We've probably seen the show two or three times in full ourselves and couldn't guess a lot of the answers. So they showed some pretty serious dedication! Snow had just started to fall when we reached St. Cecilia's Church in Kearny, home of friend to the ladies, Father Phil. Aaay - it's the real Stugots In addition to the photos shown here, we drove past or made stops at a number of familiar sites, including the Hackensack River Bridge where a significant whacking took place, the dead Czech's grave, La Pizza, Searchlight Diner (actually Seabra's Rodizo), Richie Aprile's private club, Carmine's Funeral Home and Party World, among many others. In between we watched clips from the show to refresh our memories. The atmosphere was really enjoyable and well-organized, with plenty of time for guests to ask questions and a nice pace for the day. Remember when Sil took action over the Columbus Day protests? If ever there was a useless nephew it was Christopher Moltisanti. To make things worse, he was actually Carm's cousin. Get your gabagool and prozhoot' at Satriale's...or not. Residents of the neighbourhood thought they were getting a pork store, but in reality Satriale's was built exclusively as a set for the show. When shooting finished, the owners sold it off brick by brick. Today? A parking lot. These onlookers seemed to enjoy our tour as much as we did.

The two major stops were Holsten's, setting of the infamous final scene, and the Bada Bing, which is actually a real gentleman's club called Satin Dolls. At Holsten's the staff welcomed us with a taste of their delicious onion rings and we were invited to order lunch from their menu. This is no tacky tourist trap - we had the best grilled bacon and cheese sandwiches of our lives, still hot and delicious when we got back to the bus to eat them. The place was filled with regulars enjoying a Saturday lunch. Everyone lined up to take pictures in the booth that Tony, Carmela and AJ sat in, held open for us with a reserved sign. Holsten's is a real place in Bloomfield - an awesome spot to have a meal, even if it may be your last... As you can see John squeezed into this infamous booth at Holsten's. Do you think Tony would fit in there?

Satin Dolls (aka Sil's club, The Bada Bing) was an interesting stop because the club is, in reality, quite different than on the show. First of all, New Jersey has a law prohibiting topless dancers where alcohol is served. You can only have the 'boobs or the booze' so to speak. So seeing the girls with clothes (albeit minimal) on was a surprise. Second, the club looks a lot bigger on the show because of all the mirrors inside. This is the one place on the tour where photos were prohibited and apparently some of the staff members have appeared on the show. Aspiring dancers can work at the real Bada Bing, aka Satin Dolls in Lodi

All in all, On Location Tours makes you feel like you're a friend of theirs, taking guests on a fantastic exploration into the world of The Sopranos. You can almost see this as a tour of North Jersey as well, which is a really interesting place often overlooked by visitors to New York. We had a great time on the tour and would recommend it to every Sopranos fan. If you're a fan of other New York area movies and televisions shows, check out On Location Tours for their full range of excursions.

Who's your favourite Sopranos character?

Thanks to On Location Tours for hosting us on the tour. All opinions are always our own. A Walk In the West Village

Im not sure you can say chris was carm’s cousin. Him, tony, and tony b went on about how they use to spend the summers up north at the farm when they were children. Chris continues to talk about how when tony and tony b are together they treat him differently. I love the idea of the tour, being from new jersey/north jersey i see all these sights when i go visit family.

Thanks, this really inspired me. Planning a trip from England, so great to get a good feel for the quality of the tour experience. The fact I plan on renting a Cadillac Escalade, gives an indication of where this tour ranks in must do activities whilst state side.

I’m so pleased you enjoyed the tour! Technically, I wasn’t an extra – I was a double/stand-in for many actors totalling 13 episodes. I’m developing an indie film called MEGABALL$, a comedy about the lotto and … the Mob. Joe Gannascoli (Vito Spatafore) has committed to a supporting role. You can follow the progress on our web site http://www.MegaBallsMovie.com, on Twitter @Oroloro and on Facebook.

It’s always nice to know clients on my Sopranos’ Tour had good time!

Hey Marc – that’s awesome! Best of luck with the film =)

Take away that beard and Vinnie Paul grin, and Johnny is a dead ringer for Tony! Sounds like a great tour, espesh that bacon and cheese grill thingy damn you i’m hungry now. Woulda been cool to order a continental roll for satriale’s, with extra czech sauce. Vito sure is a happy looking fellow, did you ask him if he was happy the way his character ended on the show?

No you have to go down to Balmore and do The Wire tour, ask for McNutty.

Kevin, that grilled cheese and bacon was the BEST thing I’ve ever had. Truly magnifique! They showed a clip on the bus before the tour started and Vito said that he was actually the one that came up with the idea of his character’s ways changing.

Now this looks bar far much cooler than the Sex and the city tours you can do in New York! Love the Sopranos!

I think you can inadvertently do a SATC tour when you’re in NYC, haha – that show was on for so long and covered so many spots, I know I’ve unintentionally found myself in lots of the locations. But to see Sopranos stuff you really have to get off the beaten track.