Home›Destinations›South America›Chile›W is for Wet: A Week in Torres del Paine National Park

W is for Wet: A Week in Torres del Paine National Park

Paine is an indigenous word for 'blue.' The most famous attraction at Chile's incredible Patagonian national park are the granite towers that give its name. At 2,900 metres (9,400 ft), they are usually shown in pictures to reach high into the beautiful blue sky. As high as your ambitions for the park, perhaps. At least 200,000 people make the journey each year to try their luck at seeing them. 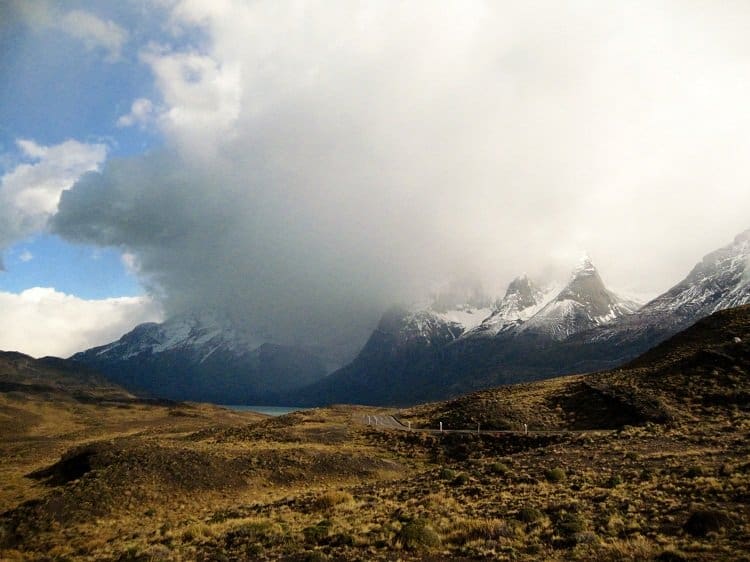 Gorgeous weather here but what about on the main trails?

And what a journey it is. You may fly into an airport at either Punta Arenas in Chile or El Calafate in Argentina and make your way to Puerto Natales. From El Calafate it's five hours and a border crossing, or a three-hour drive from Punta Arenas. From Puerto Natales you'll have another two and a half hours to the park and maybe catch a catamaran to your accommodation as well. At just over 227,000 hectares, the park is massive: you'll need to allow at least five days to see it all properly (more if you're smart). And if you want to do it cheap you're going to have to camp. Don't bother asking anyone what tomorrow's weather will bring.

Everyone will tell you that the weather is unpredictable. The wind is fierce and you can experience four different seasons in one day. We walked in everything from sunshine to snow to driving rain over the course of five days. And here lies the predicament: if the clouds set in and the weather is shit, you're essentially just paying to camp. I've got news for you: even the refugios aren't nice for the price. If you're flush with cash you can pay to stay in one of the high-end hotels and have all your activities planned for you, retreating to luxury at the end of the day. But that still won't help you with the weather. We couldn't see the towers but we did see some lovely landscapes such as this one.

The first day of our trek along the 'W' started pleasantly enough. We warmed up with the Cuernos trail and took in views of Lake Nordenskjold. It was completely overcast, clouds shrouding the black slate Horns (one of several named geological features along the Massif) and the rain began before we reached the first refugio. We'd seen the weather forecast but were hoping for the best. After all, the location of the park means that most visitors have just  the time they've budgeted there. Things were not looking good for the next day. It was the end of the season and a very casual attitude prevailed at Refugio Los Cuernos. Our cabana was dirty, with hair on the bed and stained sheets that looked like they'd been slept in. The toilets were disgusting with rubbish overflowing (some stalls admittedly much better than others) and everyone had just one tiny common area to crowd. Just try to complain. Many of the refugios are closed after high season and the owners can run the open ones as they please. The next evening at Paine Grande was a marked improvement, but the refugios all lack some of the basic necessities travellers need when trekking in Torres del Paine. We took a boat cruise to see the face of the Grey Glacier with its incredible blue ice. We loved the festive atmosphere on the boat as staff passed around pisco sours and whiskey. Only in South America!

The main one being proper drying rooms for gear and more heating. Because you're going to get wet. On our second day we got soaked. It rained hard all day on our walk to the French Valley, except for when it snowed while we were checking out the French Glacier [insert ad for Gore-Tex]. We saw no point in ascending the steep trail to the lookout so we missed out on one of the most impressive views in the entire park. We'd basically walked to Refugio Los Cuernos and endured the night just for a chance to see the French Valley and spent our afternoons drying out our clothes in front of wood burning stoves with all the other travellers spending their hard earned vacation days to do the same thing.

At least the food was good. Most of the people we spoke to were grumbling about it. A group from Portugal rued their choice of Torres del Paine over El Chalten in Argentina, which has similar views. A couple from Belgium lamented that they didn't think the scenery was anything more spectacular than what they had seen elsewhere in the world. Certainly not for the cost of the travel and accommodation. Most people told us they would never come back. The clouds and rain loved to hang out over the W trails.

"This is not me," said a young North American woman in the refugio bathroom looking particularly deflated. She shook her head. "I don't want it to be me." She struggled to wash her face and manage her contact lenses as she told me her story. She had hiked ten hours the day before to get to the lookout for the towers. "That walk killed me. But I wanted to see the Torres," she said with a shrug. We spent a day checking out the wildlife in the park. Here a guanaco grazes in the daisy fields.

Sure you can never predict the weather but from what we hear this happens a lot at Torres del Paine. There is less rain in the summer months but the wind is almost unbearable at that time. And I can't even begin to imagine what the crowds look like. A guide I spoke to told me that there is no guarantee for sunny days in the summer, either. Good weather is never a sure thing anytime in the park (though we're told that November is an ideal month to visit). In the shoulder season fewer facilities are open. The park can't really handle the number of visitors it receives: at some of the campgrounds the toilets were closed because they were backed up from the high season. Most of us were saying the same thing: we came all the way here and spent all this money for this? Perhaps places like El Chalten would have been a better bet. But, it is what it is. A wild, magnificent and untameable place that refuses to cooperate with the schedules of humans. That is what makes it so special, so unattainable. Its guests must be prepared to see none of the major attractions. The towers barely peeked out from behind dark grey clouds all week. Towards the end we gave up on them.

The fun-loving four: our group saved the week. Photo courtesy of Brad Lindenberg

It is impossible, however, to come here and see nothing at all. Our last two days were our favourites. We took short walks where the weather was good and learned more about the park and how it was formed. We drove around to check out some lakes and waterfalls, which were stunning. We took in the views of the Massif and appreciated how the wild weather enhanced our sensory experience. We watched the wildlife with curiosity: condors, woodpeckers, guanacos (llamas), hares, foxes, skunks, flamingos and emus seemed to thrive in the conditions.

In the end, we had a wonderful week and the park managed to capture our affections. The people we met played a huge role in that. We found a new friend in Brad, a witty entrepreneur from Sydney and our friendly Chilean guide, Lucho, who kept us motivated and entertained. Staff are friendly and try to make you comfortable (you may need to ask them for exactly what you want, however). You will meet other hikers in the same predicament and it will form a bond between you. Luckily we have plenty of time this year and aren't too upset about our bad luck with the weather. Perhaps Torres del Paine wanted us to return some day, keeping its greatest wonders at arms length. It was an amazing experience, one that is only possible in a place as enchanting as Patagonia.

Has weather ever had a major impact on your travels?

That’s a shame about the weather, but that’s what I’ve come to expect when you go trekking — unpredictability.  I’m only going to have 2 1/2 days of trekking in the park on my Patagonia trip in March, so fingers crossed.

Those blue glaciers are amazing!

I wonder what it will all look like after the huge fire they just had there. The glaciers are incredible – you’ll love them! =)

Thank you for this post! I’m going there in February, so looking forward to it!

yes torres del paine is special, i feel blessed to have been there in the 90’s … memories of black slate pebbles, following puma prints over spaghnum bog, being followed by condors, fish rising next to a glacier, drinking wine with a dark Chilena, delighting in the sun, despairing in the rain, drying the last cigarettes on a camp fire, eating pan del indio, wondering how to cross the Hielo Sur … respect to the Chilean students who did it on a slim shoestring, and to those who stepped off the beaten track

What a beautiful comment…I hope we will be able to get back there someday…thanks!

yes torres del paine is special, i feel blessed to have been there in the 90’s … memories of black slate pebbles, following puma prints over spaghnum bog, being followed by condors, fish rising next to a glacier, drinking wine with a dark Chilena, delighting in the sun, despairing in the rain, drying the last cigarettes on a camp fire, eating pan del indio, wondering how to cross the Hielo Sur … respect to the Chilean students who did it on a slim shoestring, and to those who stepped off the beaten track

the blue colour is so vivid on the glacier that they look almost photoshopped. hehe, i know they aren’t though. once again, stunning scenery / photography!

They really were that blue, we couldn’t believe it either! Thanks so much =)