Every visitor to Buenos Aires needs to visit ESMA. Even if a visitor makes annual trips to the Argentine capital, return visits to ESMA are always appropriate It’s a work in progress. New buildings are always being opened, and new displays rotated in the museum.

After the first visit, there’s something unexplainable that keeps drawing many people back. The 40-acre campus is a comprehensive human rights memorial recalling the term and its lingering consequences

It’s the drama of lives destroyed and a monument to man’s inhumanity to man that attracts — fascination over how one group of people can kill another group of people over nothing more than political ideologies.

But it’s more. It’s also a place of the Phoenix. Where hope rises again from the ashes of madness.

On March 24, 1976 in a bloodless military coup, the Argentine army took control of the government apparatus and ushered in a period of terror and brutality.

President, and the Army’s Lieutenant General, Videla’s sworn purpose was to crush the guerrilla movement which arose during the bumbling Presidency of Isabel Peron and restored standing. Much of the Argentine press and public gave their support, at first. Anything, they felt, had to be better than social order run by a Spanish strip-tease artist.

During what the military junta euphemistically called the “Process of National Reorganization, or El Proceso, security forces, under the direction of the military junta, roamed the country arresting torturing raping and killing anyone on their list of suspected leftists. Under military rule, El Proceso came unraveled, and the Argentine economy continued to decline into an utter collapse.

When General Leopoldo Galtieri assumed the role of president in 1981, he played the nationalist card and instigated an invasion in April 1982 to dislodge the British from the Falkland Islands. Argentina had claimed the Islas Malvinas for nearly 150 years, and it was game on.

Overnight, the military move unleashed a tsunami of nationalist euphoria that subsided almost as fast.

Once a place where human rights were destroyed, human rights are now celebrated and honored. ESMA is an attempt by Argentina to remind people of the truth summed up by Spanish-born philosopher George Santayana” "Those who cannot remember the past are condemned to repeat it.”

The buildings stand as white washed watchmen and reminders of a time and place where the government got out of control and in its paranoia kidnaped, tortured and killed 30,000 of its citizens.

Today, ESMA is a school, museum, and living history. It is a testament of man’s cruelty to man and a reminder of what can happen when men put greed, and lust for power above the desire to do the right thing fo the most people. The museum is orderly, spacious, well lit and organized in such a way that as a person wanders through the exhibits, they retrace the history of the Dirty War.

Inside the museum, just past the information desk, possibly the most eye-catching display. A 1962 Ford Falcon is presented in an exploded-view. The Ford Falcon was the official vehicle of the PFA or Argentine Federal Police. The PFA was the military apparatus for rounding up dissidents, and the Ford Falcon was their car. Beyond the Falcon are small displays of passports and other documents that recall the lives that were snuffed out. Cups, forks, knives — many handmade by prisoners — and other items, drive home the point that the people who lived, and died, here weren’t just faces and random numbers. Next, are two galleries; one of photography one of the paintings. The snapshots were made by various while the paintings and murals are by contemporary artists who share their impression of ESMA and its purpose. Both photographs and paintings were based on what the artists read and heard from survivors.

A cafeteria and bookstore complete the ground floor of the museum and the free and open library to human rights occupies most of the second floor.

The grounds are open to visitors although many of the buildings are not accessible as they are either private student apartments or under reconstruction. The important buildings are open and can be roamed and explored, either alone or with a guide led group.

On the shady streets are signs posts with images and stories of some of the prisoners who lived — and died — here. Their faces are also scattered throughout the property on sides of buildings.

The Plaza of Arms, in front of an administrative building, is an unadorned reminder of what transpired here. Each morning, prisoners were woken and made to stand for hours on the plaza, known as “the grinder.” Any prisoner who couldn’t make it out of their bed was killed where they lay as others struggled to move to the concrete parade field.

It’s quiet now but doesn’t take much imagination to conjure up images of thousands of men and women standing on the slab, grateful that they made it through another night. 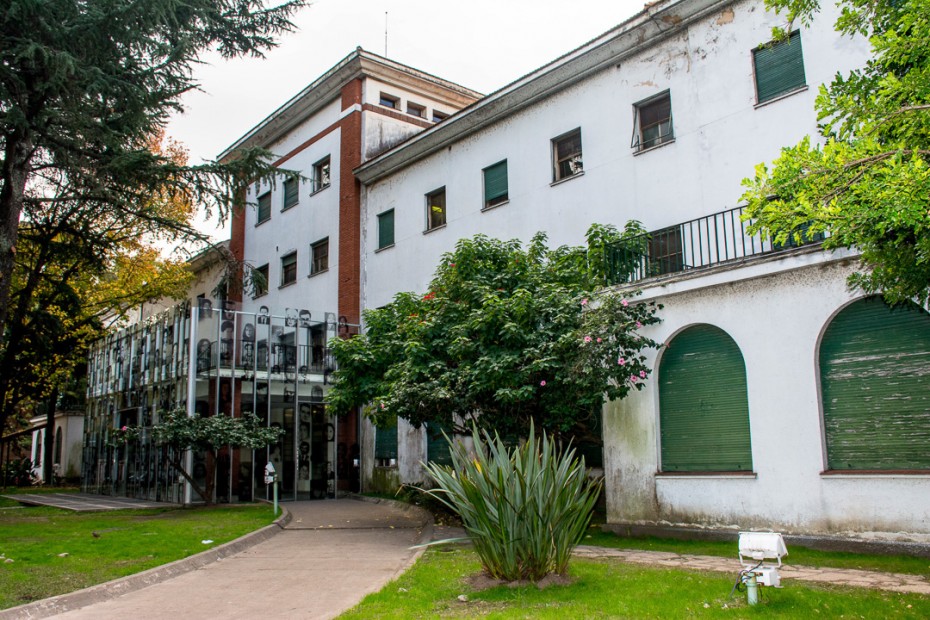 The Officer’s Casino is the place that was central to the functioning of ESMA during its peak operation.

The building is almost finished undergoing restoration and will be closed to the public until the end of 2015.

With cells in the basement, third floor, and attic, the 2nd and 1st floor were administrative offices and were two floors where prisoners were never allowed to go.

Originally, the Casino was the only torture center. But by the end of 1976, four more had been added.

In 1977, offices were built to provide working space for prisoners recruited to assist Admiral Massera with his political objective. Massera used prisoners to make fake documents, fake Montonero items, and other fabrications to mark subversives and overvalue his own role in “keeping Argentina safe.”

In the Casino’s basement, doctors injected “transfers”, a polite term for execution, with tranquilizers before being loaded onto a plane or helicopter and then dumped into the Rio de la Plata.

The basement also had a phone booth where detainees were forced to call their families. Under supervision, and great pressure, the prisoners, would beg their parents to stop legal proceedings against the government.

When the World Cup came in 1978, it brought the inquisitive mind of the international press. The press wanted to look into the accusations of human rights abuses.

Based on the attention, the Inter-American Court of Human Rights visited ESMA in 1979. Anticipating the visit, the military changed key aspects of the building and the basement was cut off from the rest of the building. The main staircase was walled off and painted so as to appear as though it never existed.

The ruse worked and to the untrained eye, it was convincing.
In a 2010 talk with the New York Times, Pope Francis, then-Cardinal Bergoglio, said he had assisted in hiding people, and helped others escape the country during the period, and petitioned the country’s military leaders directly for the release and defense of others.”

Victor Basterra was a prisoner at ESMA. Held from 1979 to 1982, Basterra’s job was to make snapshots of ESMA’s officers for false identification documents.

He secretly made copies of their images, as well as some of his fellow detainees.

The pictures of officers are the only proof that individual men were at ESMA and are now being tried. The pictures of his fellow prisoners now are scattered around the grounds. Today, Basterra is one of the volunteer guides that tell ESMA’s story. Basterra’s life has come full circle.

Standing in an area where he slept with other detainees, Basterra said, “This looks exactly the same as it did back then. It’s full of terrible memories — but also memories of solidarity and of courage.”

“It’s a powerful feeling,” he added. A Guide to Some of London's Thrilling ... I visited the ESMA museum in June ’15, it made a big impression on me. Like the Holocaust this should never be forgotten. Also the exhibition about the Armenians , many thousands killed by the Turks, was impressive. Some buildings were closed to I will see ESMA again next time in Buenos Aires.

Thanks for being a reader! Yes, be sure to see ESMA again. I try to go down there (I live about 2 miles away) every month or so and it seems that everytime I go, they’ve opened up another building or put up a new display in museum.

What a comprehensive write up. The museum sounds fascinating

Thanks for the kind words, glad you enjoyed it. Yes, the museum definitely is fascinating and I go back there every few months. It’s a wonderful place in so many ways.