Home›Destinations›Europe›Western & Central Europe›Fall Fun With the Bears of Bern, Switzerland

Fall Fun With the Bears of Bern, Switzerland

John and I are animal lovers and we never miss an opportunity to check out some furry creatures. I was never too excited about visiting the Bern bears, however, because I'd always heard that the old bear pits were cruel. But since 2009, the bears were moved to a new 6000 square metre park alongside the Aare river. We couldn't miss seeing them! 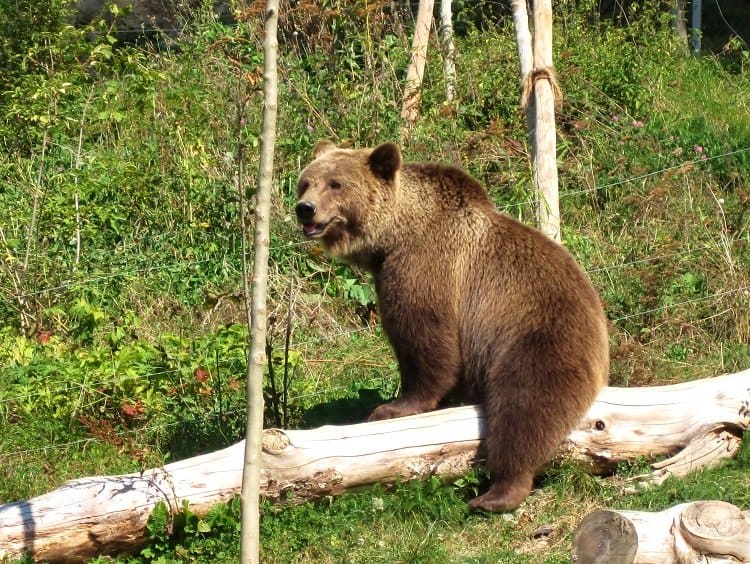 ...and the bears' new home - a considerable upgrade!

Switzerland's capital city has always had a special relationship with bears. According to legend the founder of the city, Berchtold V. von Zähringen, first caught a bear while on a hunting expedition and named the city for this animal. In 1224 a bear was shown on the seal of Bern. The first bear pit was created in 1513 when Bernese soldiers brought a live bear back from the battle of Novara. This pit was located at Bärenplatz until it was moved to the Schanzengraben (moat) in Bollwerkin in 1764, and was then filled with bears from the forest in Vaud. Aside from a seven year period prior to 1810, bears have always lived in the city of Bern. Bjork and the cubs 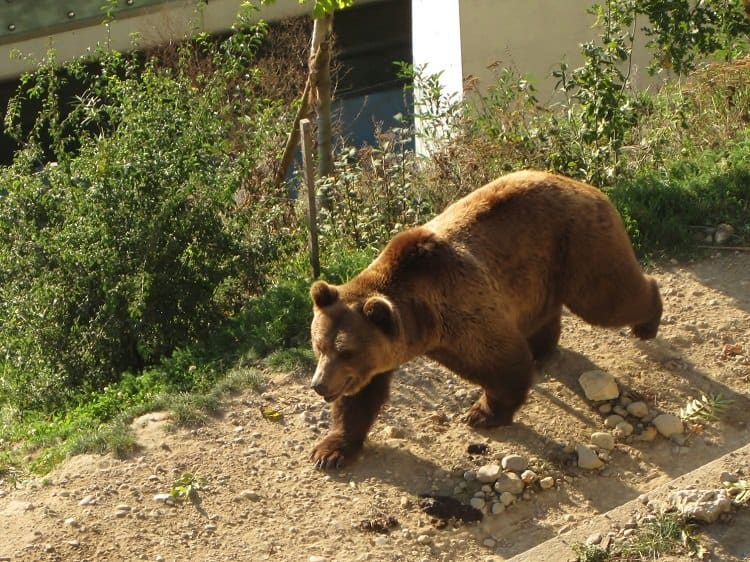 Finn has replaced Pedro as the dominant male bear at the Bern Bear Park. Playing in the water - check out the video below for a fun bear wrestle!

The brown bears currently living at the park are a family. Finn, who was born in Helsinki, Finland in January 2006 and Björk, who is from Denmark (born in 2000), gave birth to Ursina and Berna in December 2009. The babies were to be sent to Romania, however a new solution was proposed and the pair will now remain in Bern.

We visited them twice, watching them for hours as we wandered along the circuit of paths around the enclosure. They're very active and we were able to see them swim, play and graze on the grass. Most amusing to us were their meetings by the fence, though the last one we saw was a little heartbreaking with Finn and Björk placing their noses together against opposite sides of the glass partition. When she'd had enough and went to leave, he jumped up and swiped at the glass as if to say, "Don't go!" I guess they must keep him separated from the cubs, though it wasn't made clear why he is in his own space. Finally some alone time for the parents

While Switzerland isn't really a place for cheap holidays, it's completely free to see the bears. It's an easy walk to the bear enclosure from the centre of town, or take the number 12 bus (direction Paul Klee Centre) to the 'Bärengraben' stop. The paths around the BearPark are open 24 hours a day, seven days a week but the keepers are only there from 8 am to 5 pm. Guided tours can be organized on weekdays by calling 031 357 15 25. Tours last 45 minutes to an hour and cost CHF 200 for up to 20 persons (additional persons are charged at CHF 10 each). A bear's life is tiring.

If you're hungry after viewing the bears, there is an excellent brewpub called Altes TramDepot (Old Tram Depot) behind the upper platform that's great for a pint and a meal.

What animals do you love to watch when travelling? A Day Out in the Swiss Alps

Nice, close-up photos! I didn’t know about the Bern bears – very interesting. I suppose they’re better off in Bern than in Romania.

It will keep the family together at least, though I admittedly know nothing about what is best for the bears =)

So what’s the story with Finn?  He was the big kahuna, but now he’s not?  That’s too bad.

I must say, Bjork looks much better in the bear outfit than she did in that swan getup.  😉

I think he’s still the big kahuna but maybe kept separately because the cubs are still young and growing? Should have tracked down one of the keepers and asked these questions, darn it! =)

I can see why you didn’t like the old bear pits.  They remind me of the Roman Colliseum with no real regard for the creatures living there, rather just putting them on show.

Makes me wonder if the stories, the Bernstein Bears, were based on the bears from Bern.  Hmm?

I have read that many people had issue with the old pits – the bears must be happier now with more room to roam. Unsure about the Bernstein connection – I couldn’t find any info linking them despite the name…

Bears are a conundrum – so cute and so deadly. Enjoy Switzerland – I’m afraid to go there after the experience I once had with a crazy Swiss girl….

They seem happy enough splasing a round in the water.

So cute – was thrilled to be able to capture that!